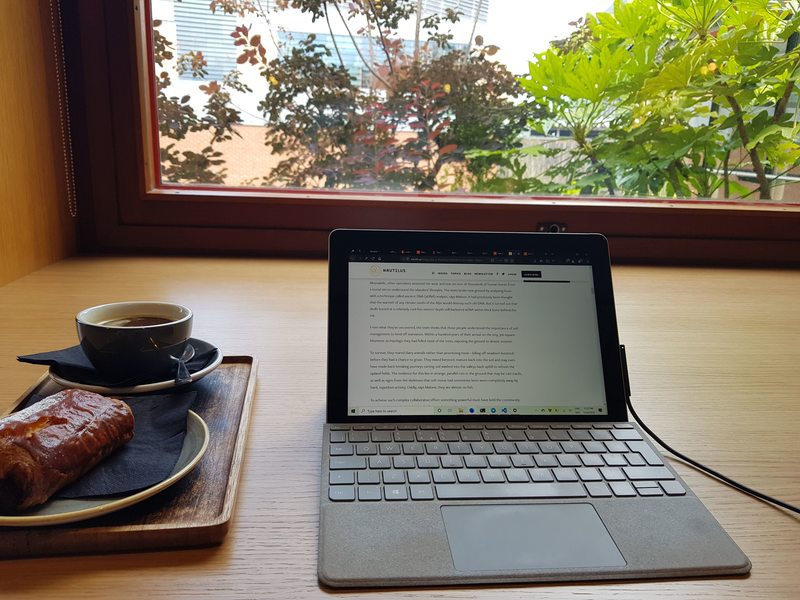 Surface Go at the British Library

A month ago I posted about my impressions after my first week with the Surface Pro X and promised a post about my former machine which is a Surface Go, a tiny marvel with which I’ve spent the past part of 2019, well, this is that post. Read on for some commentary about using the Surface Go as a main machine both as a developer and as a writer.

In love with the form factor

Before getting the Surface Go, I was using a Surface 4 Pro as my main machine, and before that a Surface 3 non-pro, so you could say I was not new to the ecosystem and had a lot of experience with those machines. I think the interesting bit happens before I got my first Surface.

At that time I was using a Macbook Air as my main machine and have been into Macintoshes since MacOS 8. I developed web stuff at that time but earlier in my life I used to develop desktop apps for the Mac and still have a fond spot in my heart for both MacOS 9 and MacOS X Snow Leopard (my favorite version of OS X). Even though I’ve spend about 15 years in the Apple ecosystem and still have some macs around, as time went by I got really frustrated with the changes Apple was doing to their business. I felt like there was no innovation happening outside of iOS and I don’t like iOS at all.

That was when I got really excited about WebOS and started learning and planning to become a little mobile ISV targeting the new system. I got myself a Palm Pre 2 and an HP Touchpad and was ready to pivot to developing apps for them. And then HP killed all of it. I went back to doing plain old web stuff in my Macbook Air and life got a bit boring.

I was in Canada for a conference and my hotel was in front of a pub and a electronics store. I got a tad drunk in the pub and went into the electronics shop to check what they had. I ended up with a Surface 3 non-pro. I justified buying it because I wanted to check out what Windows 10 was all about and it looked like a nice machine that could replace my old HP Touchpad as the mobile gizmos I took to coffee shops to browse the net and do lightweight work. It was also a fantastic machine for reading comics, which is another passion of mine.

Then the unexpected happened, I started using that machine more and more. Be aware that that machine was extremely underpowered and slow. In my machine with the dreadful eMMC drive, the windows updates from the insider program literally took 3 days to install. I’d leave the machine on the shelf on Friday and pick it on Monday ready. And I still used it more and more. All of a sudden, I was only reaching for my mac if I needed to do some iOS stuff and that was rare.

Still, using that machine was a bit painful due to its lack of power but I loved the small form factor. I was lightweight to carry around. It fit in any bag or table. I really like tiny machines and it was so versatile, changing from laptop to tablet with a satisfying magnetic click of the keyboard. And that keyboard was a joy to use.

So, I became aware that a relative was selling his Surface 4 Pro with the Surface Dock included. I quickly realized that if I was using the Surface 3 non-pro that much, that I could really benefit from the added screen and power of the Surface 4 Pro. I got it and it became my main machine for everything until…

Why did I get a Surface Go?

… until one day at a decentralization meetup, I had the following dialogue with a friend:

And that was it, my screen was curved like a VW beetle, the battery had swollen and pushed the screen forward. That machine was lost.

I was low on money and couldn’t afford a new Surface Pro. I just got up, excused myself from the meetup and run towards a shop. The best I could afford was the Surface Go 128gb and that was what I got alongside an external HD to transfer stuff. I quickly copied things around and the Go became my main machine.

The idea was to use that machine as a temporary one until I had the means to buy a beefier and more powerful Surface Pro but as soon as I started using it, it brought back the best memories of the Surface 3 non-pro. The small form factor, the lightweight carry, all the things I loved from it but with a fast SSD. It became clear, it was not going to be a temporary thing. That was my machine and 2019 flew by while I sat comfortably with it on nice coffee shops. 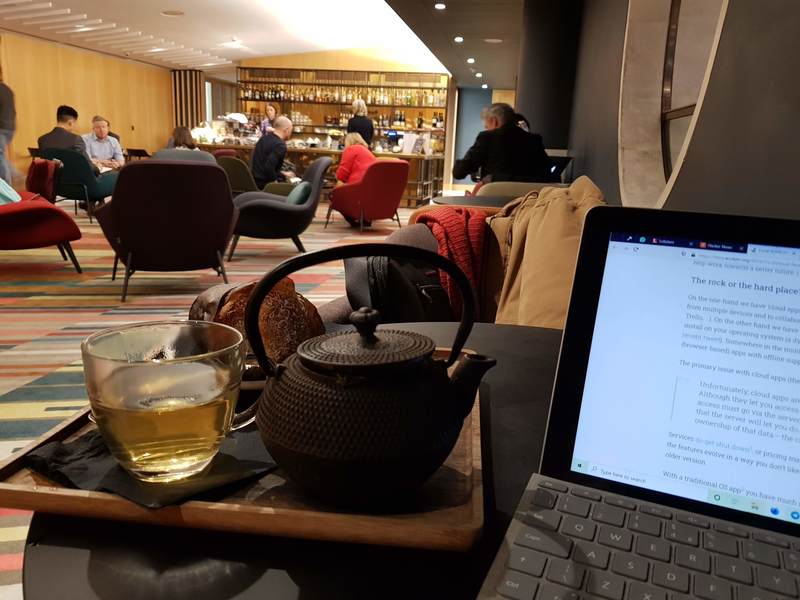 What I used it for

I’m a developer. Thats not only what I do for work, it is also one of the things I do for personal fulfillment and fun. I mostly develop web stuff and that machine was well suited for it, specially with WSL and all the Linux goodies I can bring into it. I could also run Racket and LiveCode which I use for doing desktop gizmos.

The small form-factor and low powered CPU made me change some of my computing habits. I started multitasking less and focusing more. First because the machine can struggle a lot if you have too many hungry apps open at the same time, but then because it made me work better. I love how the small and underpowered machine helps me focus. One can easily think that this is a flaw in them, that running a gazillion things at once is being productive. Lots of my friends have their browsers, editors, slack, spotify, terminals and more open. They constantly switch between things with ease. I’m not like that, I enjoy having one thing open and working with it. Still, I tend to keep a browser open as well as I move back from whatever I am doing and the browser as the pomodoros fly by.

“What people perceive as shortcomings in this machine are the same characteristics that I perceive as features. They make me work better.” — Yours Truly.

I have small hands, so the keyboard feels quite pleasant for me. It is the second best keyboard I’ve ever used (the first being the eMate 300).

I tend to work from coffee shops, some of which have quite small tables. I also enjoy working from trains as I went from London to Edinburgh many times in 2019. The Surface Go is the ideal digital nomad machine. 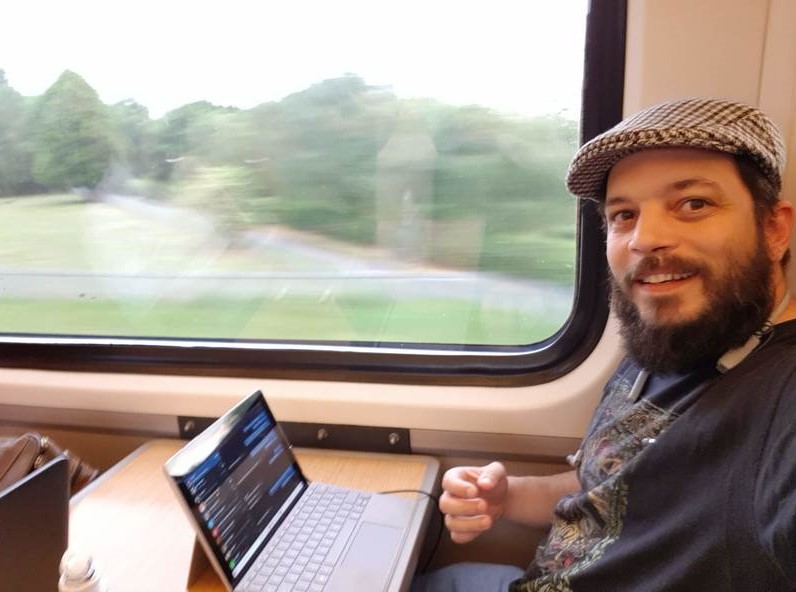 Working on a LNER train to Edinburgh.

WSL, the new Windows Terminal, scoop, all made my life easier. There were very few cases work wise that Windows 10 or that the low specs got in my way. I don’t need (or like) Docker for my work. I like building simple things and sometimes boring technology is a much better fit than whatever the JS ecosystem is going crazy about these days.

I’m heavily invested in the Secure Scuttlebutt ecosystem and am developing some products for it. My main project is Patchfox, an add-on for Firefox to do SSB stuff. All my SSB stuff for 2019 was developed in the Surface Go. Running VS Code, Firefox and a terminal, working slower than my peers but focused and happy.

Of course I can’t do some development workloads in it. No one is doing machine learning in Surface Gos, and if they are, they’d probably be happier elsewhere. This machines fit my own personal dev workflow and the tasks that I chose for myself.

I also enjoy writing and shipped a couple books in the past. While I was using the Surface 4 Pro, I wasn’t writing. I noticed that all my books were either written in the Surface 3 or the Go. I like small machines for writing. I believe that them both, along my old Newton 2000 and eMate 300 were the best writing experiences I had.

Now, in 2020, I have some book projects going on and am writing more on my blog. I consider this a side-effect of using the Go. For example, I’m using it right now and that’s when I decided to write this blog post. Writers among you know that writing is a game of focus. The soon you lose focus, the writing stops. The Go helps me keep my focus, which helps me to write more.

I’ve been using the Surface Pro X as my daily driver most of the days. I’m still struggling with using it for development as the ecosystem is not yet ready. Today, I’ve decided to pick the Go instead of the SPX. Oh my, how I’ve missed it. I’m already writing more. I think that for this week I’ll experiment with using the Go as my daily driver again. Lets see where that takes me. I’ll miss the battery life and the LTE of the SPX, but the small form factor and the coziness of the Go might be more important for me at the moment than the physical advantages of the SPX.

In the end, for almost all of 2019, the Surface Go was a powerful tool in my life. It helped connect me to my hobbies and passions while not sacrificing my ability to work. It fits the way I work and the way I want to work. If I’d change anything, I’d just improve CPU and give them all LTE, so maybe fitting a Microsoft SQ1 into it would be a great idea.

If Microsoft would ship a 10 inch SPX I’d buy one on the spot! For now, I’m just enjoying my favorite machine again.