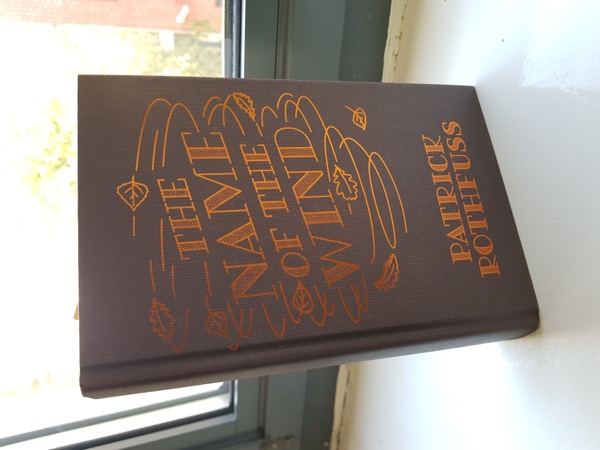 The Name Of The Wind Cover

I have been an avid reader for as long as I can remember being able to read. My parents have an extensive collection of Science Fiction books from the golden and silver eras in Portuguese and I grew up reading them. They also had a lot of Fantasy books, which I devoured just as fast. The first book I remember — in hindsight, of course — making an impact on my life was The Lord Of The Rings.

While I was living in Brazil, I was mostly a Science Fiction reader. I still read the occasional book from other genres but it was usually because of the authors more than the genres.

Every year while all my grandparents were still alive and living in São Paulo, we’d travel from Rio de Janeiro all the way there — which is not that far, about seven hours by car — for Christmas.

One of my fondest memories happened during one of those travels. My city, Niterói, has very few bookshops. It was really hard to buy anything that was not mainstream bestsellers there, so I’d wait all year to travel to SP and buy books there, for they had amazing book shops at a walking distance from my grandparents.

At that time, I already knew enough English to be able to enjoy reading some of my favourite authors in their original editions. Most of those authors are never translated into Portuguese, or even sold in Brazil. Learning English opened literature for me.

Yes, Brazilian literature is damn great. There is a ton to love about it. We just don have as many Science Fiction or Fantasy writers.

On that specific year, I had discovered Terry Pratchett. I read horrible translations of the first two Discworld novels, and was keen on getting my hands on the original pocket books.

We arrived at the book shop and the interaction went somewhat like this:

I got the whole shelf, and spent the following year (actually just a couple months) reading everything.

Years passed, I got married and eventually moved to London. It was here, away from my bubble of IRL friends and family that I’ve found myself with too much time in my hands. Going to bookshops, and discovering new authors has been my favourite hobby in my new country.

Somehow, I ended up reading more Fantasy books than Science Fiction. It was probably because I found more reviewers on authortube talking about Fantasy than about Science Fiction, but I discovered and re-discovered so many authors in the last two years.

And that brings us to Patrick Rothfuss and The Name Of The Wind. He was first mentioned to me by a colleague back in Brazil. At the time my own arrogance made me ignore the recommendation. I was much more interested in spreading awareness about the books I liked than learning about books I might like. Today, I recognise the errors of my past self, and how I could have enjoyed this marvellous book many many years ago.

Pat Rothfuss first re-entered my awareness after some Youtubers I follow kept mentioning him and his beautiful prose. My gold standard for prose has been Ursula K Le Guinn. She still a source of unmeasurable wonders for me. But my boi Pat knows his letters too.

One day, I stumbled on a sort of bootleg Youtube channel that edits (mostly re-cuts) parts of Pat twitch streams and repost it. I watched him talking about how The Name of The Wind was basically a tale of a man trying really hard to get into a library. I was like: “is this it? a book where what happens is a guy trying to get into a library?” needlessly to say, I had to check it out.

I got the Kobo Preview for the book…

I read it for ten minutes before packing my things and walking to Foyles to buy the damn book.

I got a hardcover version. It was a bit bulky, so I also got the eBook so that I could read it when I was not at home.

When I was almost halfway through the book, I walked again to Foyles and got everything they had from Patrick Rothfuss. I got The Wise Man’s Fear and The Slow Regard of Silent Things. I also got the deluxe hardcover 10th anniversary edition even though I already had the non-deluxe 10th anniversary edition, all because I wanted the illustrations.

It was the first time since that day in my teenage years when I bought the whole Terry Pratchett shelf at a book shop in Brazil, that I went and purchased every single book I could find by an author in one go. 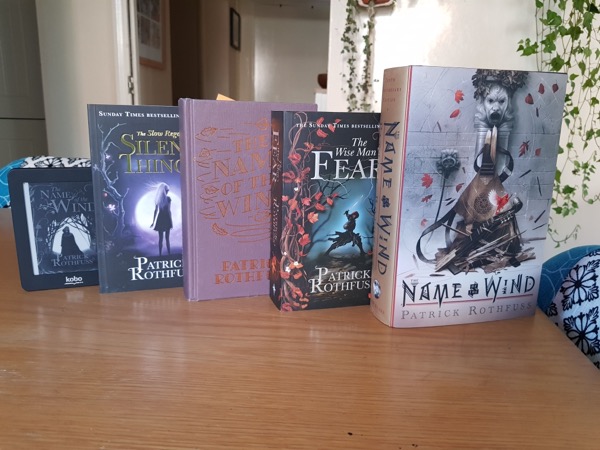 Gotta catch them all

I’m obsessed about this book on so many levels that I don’t think I can do a proper review. I can’t make it justice. It is a wonderful book that catapulted itself to my favourite books shelf, maybe it might even be my favourite book. It has everything.

I’m a sucker for lore. I’m a lore sponge. Give me a deep complex lore, and I will pour myself into it until it feels more alive and real to me than the real world. The Name Of The Wind not only has lore to satisfy any need, but it presents it masterfully. Contradictory tales, dubious accounts, myths, and a storyteller that knows all the buttons to push. Lore, just like it’s less hipster cousin Story is not only about what happened, but the telling of what happened. Storytelling is not infodump. Patrick is a storyteller.

Kvothe is not your typical hero. He might not even be the hero. He definitely has a story to tell, he is also a damn good storyteller.

The cast of characters is fresh. The challenges and tribulations they experience are also beyond your typical cookie cutter Fantasy tale. It is true that in the last ten years, more authors have been pushing Fantasy books that are just as fresh, but when this book came out, it was a really fresh package.

I love how the world feels modern in a steampunkish and scientific way without going too deep into those tropes and ceasing to be magical and fantastic.

The Name Of The Wind is at the same time, a very small story and a very large one. It tells you of an innkeeper and his life as he narrates his exploits. It also permeates the whole world and the consequences of his actions.

Very few authors can write these intimate stories and still make them epic with larger ramifications. Patrick is a damn fine storyteller, if not one of the best I have ever seen.

Every book has its faults. Not all books will appeal to every one. This book called to me. I’m happier after reading it. I recommend it to anyone with an interest in fucking good storytelling, beautiful prose, music, lore, and drama.

I’m already a couple chapters into the second book. Usually, when I read reviews or commentaries about The Name Of The Wind, I always notice people commenting or even ranting about how long Pat is taking to write the third book.

I don’t care for that at all. Patrick can take as long as he wants and I’ll be cheering him all the way. There are many other books to read until the third book is ready. I’m not in a hurry, I’m enjoying the ride.